The types of metal stamping jobs used in metal fabrication shops are as follows:

In progressive die stamping, a sheet of metal is unrolled, fed into a press, and passed through various stations in the die that perform one or more metalworking processes (eg, cutting, bending, and punching). Throughout the process, the sheet stays in the die's conveying system and the section remains attached to its base strip. As the press moves down, the workpiece stops at each station and is deformed by the die. As the press moves up, the sheet moves horizontally across the bed. The part is gradually formed as the workpiece is machined on the station. At the last stop, the finished product is ejected from the sheet.

The advantages of progressive die stamping operations are rapid production of parts with complex geometries and tight tolerances, high repeatability, and reduced labor costs. It combines multiple metalworking steps in one tool. But not for parts that need to be deep drawn. 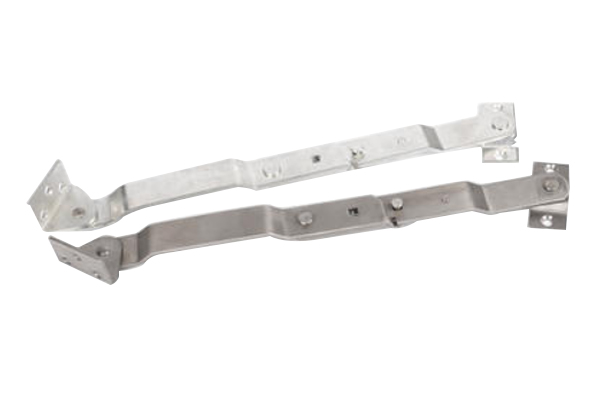 In transfer die stamping, the workpiece is first separated from the sheet metal and transferred from one stamping station to another. The separated material can be transferred to different presses, allowing the fabrication machines to produce various parts in parallel.

Transfer die stamping is used for forming large parts. Since the part is not attached to its parent metal sheet, the punch can penetrate into it without affecting other operations, so it is suitable for parts that need to be deep drawn. It is also used in processes with intermediate steps where it will be more efficient to separate parts early in the process.

In a four-slide or multiple-slide punch, the slides are aligned horizontally and slide against the workpiece. It is a unique stamping process that differs from the traditional stamping process that requires the press to stroke down. Each slide has a tool that can bend, twist, cut or create a horizontal stroke at the same time. A multi-slide press can have more than four moving slides.

Four-slide stamping is ideal for creating complex and multiple bends, bends greater than 900, and forming cylindrical parts. It has a unique deformation ability. It can produce parts quickly, has cheap tooling, and has a low initial cost. It also produces less scrap and reduces material costs, as virgin metal blocks can be bought closer to finished widths.